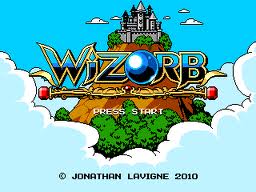 A wandering wizard named Cyrus arrives in the kingdom of Gerodu to find that it has been besieged by the evil Demon King and his forces. Only Tarot Village remains free, and even then, it has suffered major damage and its four Sacred Children, who hold the key to stopping the Demon King, have been kidnapped. Cyrus must now use his magic to fight through the kingdom, defeat the Demon King's forces, rebuild Tarot, save the children, and save the kingdom.

Wizorb is unlike most other block-breaking games. Players control Cyrus as he moves around the level in his Wizorb, keeping him from falling to his doom via the magic wand. As Cyrus' quest continues, he will acquire gold with which he can help to rebuild Tarot Village and buy items ranging from extra lives to temporary upgrades to his wand. Cyrus also has access to several spells, including fireballs, gusts of wind to help direct the orb, teleporting the orb, and being able to manually control the orb for a limited time.

Not to be confused with Wizball.