Fanfic / Everything In The World Was Standing Still 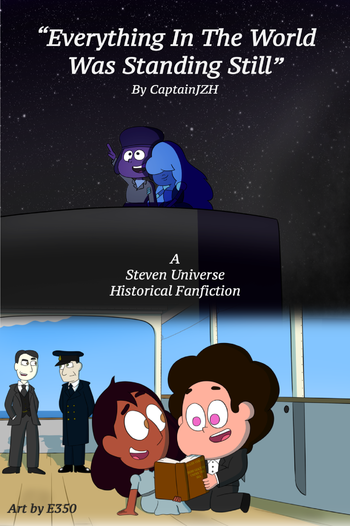 They should be fine.note  Art by E350

It's 1912. A diverse cast of characters— A wealthy boy and his caretaker moving to America after the death of the former's mother, an unlucky drifter finally heading home after an extended stay in Europe, a young engineer getting her first big assignment, an Indian family traveling to America, two lovers from wildly different classes, a stoker just doing her job, an architect with a humble past, and a scarred young woman finally getting the confidence to go to sea again —are all sailing aboard the maiden voyage of the largest, grandest ship ever built: The RMS Titanic.
— Fic Description
Advertisement:

Everything In The World Was Standing Still

is a Steven Universe AU written by CaptainJZH

and set about the Titanic on it's ill-fated maiden voyage. It focuses on a variety of characters and ships from every section of the ship, rather than specifically focusing on one perspective.

The Steven Universe characters included are:

The main story contains examples of:

The Spin-Off, Unauthorised Tales From The Titanic, contains examples of: