Comic Book / The Nice House On The Lake 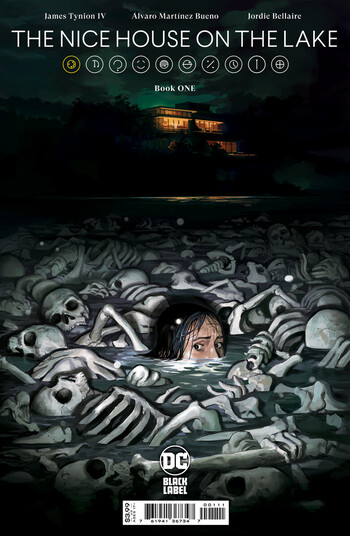 How do you think the world will end?
— Walter
Advertisement:

The Nice House on the Lake is a 2021 horror comic written by James Tynion IV, with art by Alvaro Martinez Bueno and Jordie Bellaire. It is published by DC Black Label.

Ryan Cane is a 26-year-old artist living in New York City alongside her circle of friends. One summer, she is invited by a friend named Walter to stay with ten of their other friends at a nice house on the lake.

The house isn't just nice, it's really nice. Owned-by-a-millionaire nice. And Walter has given Ryan and her friends nicknames and symbols — Ryan's is THE ARTIST, while Norah Jakobs is THE WRITER, David Daye is THE COMEDIAN, Molly Reynolds is THE ACCOUNTANT, Veronica Wright is THE SCIENTIST, Sam Nguyen is THE REPORTER, Arturo Perez is THE ACUPUNCTURIST, Sarah Radnitz is THE CONSULTANT, Naya Radia is THE DOCTOR, and Rick MacEwen is THE PIANIST. Only Walter doesn't have a nickname.

As the night goes on and they party beside the pool, however, Ryan begins to realize something is wrong. Something has happened in New York City — people are burning to death spontaneously. Their skin is sloughing off, their eyes melting in their sockets. People are dying and nobody knows why.

Tropes in The Nice House on the Lake: