"I kinda thought you'd be more worried about the fact I almost got killed."
— Obsidian
"You know, I'm really not. The first few times, maybe. But now I imagine you piss off dangerous people for fun, so it's nothing new to me at this point."
— Anri 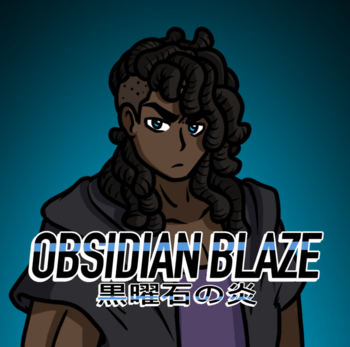 "You must be something special if my boss is so interested in ya."
Advertisement:

Obsidian Blaze is a sci-fi superhero webcomic created by Sam "Captain Taco" Duncan. In a bleak dystopian future, Tokyo is ruled by a massive corporation called Pyrite Industries, and people with superpowers are forced to hide their abilities. One of these people is Obsidian, a man with no memories and a hatred for Pyrite. After meeting some other people with powers like him, he forms a resistance to fight back against Pyrite and the corrupt government he controls.

The comic is readable here