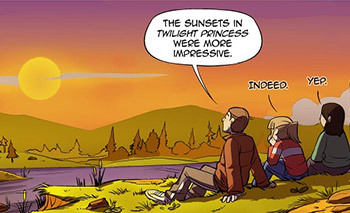 "You can just picture all the eight-year-olds in the audience going 'This is cool! I want to live here!'"
— Stuart Wilson, The making of No Escape
Advertisement:

A work of fiction with a very immersive setting appears so idealistic and 'perfect' in comparison to boring, everyday life that it causes fans to feel the need to emotionally invest themselves in it. The same carries over to characters in a story, who feel they are leading uninteresting lives. They wish they could live in the stories they love and begin Longing for Fictionland.

Frequently, these characters may feel detached from real life or seem to suffer from depression. After all, they wish to leave to somewhere they can never go or wish to meet people who don't even exist yet seem so vastly superior to those they do know. Or they may decide to actualize it, try to build something like it in the real world.

Sometimes they begin to wish they could become a part of the world, or meet the character they love.

When this character gets his/her wish, see I Wish It Were Real. May lead to an Anti-Escapism Aesop.

Very, very, very much Truth in Television for many people.