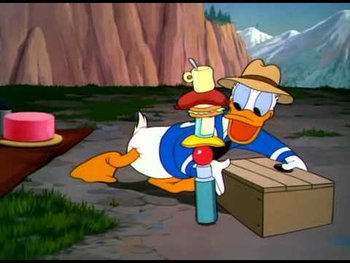 Tea for Two Hundred is a 1948 animated short film (6 1/2 minutes) from Disney, directed by Jack Hannah.

Donald Duck is out picnicking in a wooded area next to a cliff. As he sets out his food for what looks like a lavish meal, he is amused to see a squadron of ants carrying grains from the forest, one bean per ant. Donald starts to really screw with the ant at the end of the line, pushing on the ant's bean with his finger, then loading the poor little ant down with a giantic pile of food, while all the time the ant doesn't know what is going on.

Eventually, Donald flings the ant away—into Donald's custard cream pie. This backfires badly on Donald, as the ant, now alerted to the presence of a lot of delicious food, alerts all of his ant buddies.