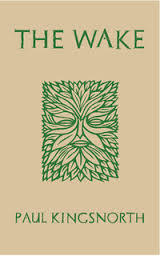 The Wake is a 2014 novel by Paul Kingsnorth set during and after the Norman Invasion of 1066. The novel uses a "shadow tongue" created by its author to mimic the Old English language that would have been used by the characters.

The events are narrated by Buccmaster of Holland, an arrogant and slightly unstable

landowner on the Lincolnshire fens, whose village is burned down by Norman invaders. His sons never return from battle and they murder his wife. Now a homeless vagabond, Buccmaster assembles a ragtag band of guerilla fighters who take up arms against the invaders. As the story progresses, however, he becomes increasingly unhinged, partly due to horrible events from his Dark and Troubled Past, and partly because the very fabric of his world disintegrating around him.

Unrelated to a roleplay about modern humanity contacting merfolk, or an online crossover roleplay of the same name.

The Wake provides examples of: