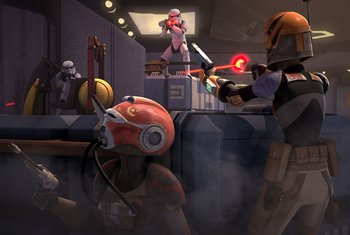 Sabine: Still a bounty hunter, I see.
Ketsu: Tell me you don't miss it.

Sabine and Ezra are sent on a mission to retrieve a droid with sensitive information, only to run into a bounty hunter and former friend of Sabine's.