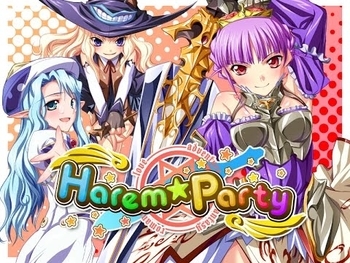 Playing Eastern RPGs can be dangerous at times, and it's not just the addiction and eye weariness that threatens the player. It's all nice and well to slaughter helpless Mooks while getting all worked up over the female protagonist, but what would you do if the Big Bad comes up with a plan to infiltrate the real world and subsequently take it over, killing you in the process? If you think this would be easy, then Moriuji Haru, the protagonist of Harem Party, begs to differ!

Every situation has its bright sides, though. In this case, alongside the Big Bad came the entire adventuring party that is hell-bent on preventing him from completing his deed of villainy and kicking him back to the world of pixels where he belongs. Moreover, they treat Haru as the Ideal Hero, their master and deity, and would serve him willingly. Did we mention that they are all cute girls?

Harem Party is a Japanese-translated-to English 2D eroge released by Manga Gamer. The protagonist and five female characters from a generic fantasy game try to track down an evil Demon Lord which slipped into the real world, in the meantime fighting off his terrible... er, hilarious minions and engaging in all sorts of sexual acts. While the plot is silly to the point of frustration, it is not exactly why this game is played for.