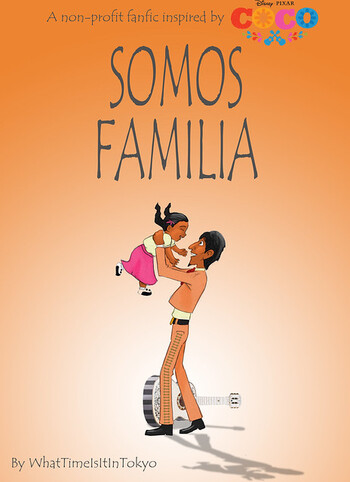 Hector: I thought if I didn't leave Mexico City, right then and there, then I'd....Then I'd never see you again.
Imelda: I had the same fear mi corazon. But we're here, together. And nothing will part us again.
Advertisement:

You know the story of Coco. (Or, you should) A man wanted to play for the world, and so set out with his best friend, leaving behind a wife and daughter. The wife grew bitter and banned music for 5 generations when he never returned. Leaving only his great, great grandson to redeem music for the family, and more importantly, discover the truth behind this lost member of the family.

Yeeeaahhh, turns out he was poisoned by his friend Ernesto de la Cruz, who was terrified to go perform without his songs which he wrote in honor of his family. But what if that wasn't the case? What if a small change in words, a sting of the heart, and a slight adjustment to fate changed everything? What if Hector Rivera lived?

) is a For Want of a Nail fic, chronicling the journey the Rivera family might've taken if Family of Choice had won over egotism. Of a family rebuilt, a life changed, twisted and turned as Hector Rivera DID go home.

This fanfic explores these tropes: