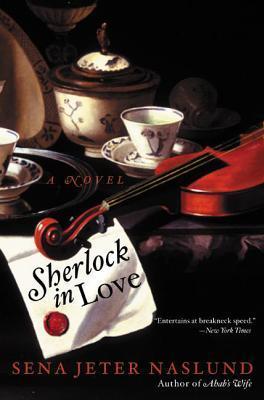 Sherlock in Love: A Novel is a Sherlockian pastiche by Sena Jeter Naslund, which deals with such aspects of Sherlock Holmes's life as his Stradivarius, his love life, and his eventual fate. It's an atmospheric, gripping tale, and while some Sherlockians reject it outright, others regard it as So Bad, It's Good.

The year is 1922. Sherlock Holmes has been dead for two years, and an enfeebled Dr. Watson is living his twilight years with his old landlady and her nurse. Watson misses his old friend so much that he decides to write a biography for Holmes and puts a notice in the paper. The responses that he gets drives him to dig an old case back up, that of the unhappy Victor Sigerson.

From there, the narrative goes back and forth between 1922 and 1886, taking quite a bit of Artistic License with the original canon. Holmes takes violin lessons from Victor Sigerson and is eventually hired to uncover Sigerson's origins. While Watson is inexplicably blind to the fact, Holmes discovers that Victor is actually Violet, and Holmes's heart is awakened to the possibility of romantic love. Alas, the Great Detective is never said by Sir Arthur Conan Doyle to have been married or even to have had a lover, and in this regard, Naslund stays true to the canon. The Twist Ending is astonishing and even squicky for some, and makes the entire story either dreadfully tragic or tragically out-of-character.

The Novella Provides Examples Of: