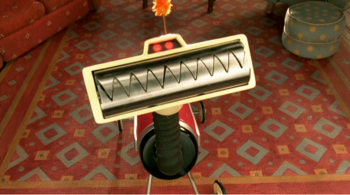 Never vacuum with anything that's got More Teeth than the Osmond Family.