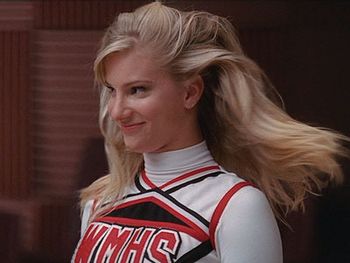 After Ian Brennan reminded us that some angels are born of a devil's loins, we start proceedings with Will in the lounge and Sue reminding him about showing her the set lists for Sectionals, which, we will remind you, is so she can reveal them to their competition. Will gets the V/O saying the problem with Sue is her Chaotic Neutral tendencies, the true wild card in the pack. We cut to ND practicing as Brittany stands in the back, not recording for Sue. We then see Sue asking for the names of the competition: Jane Addams Academy & Haverbrook School for the Deaf, Will figuring out Sue's play; he then complains to Emma, who says to drive to Jane Addams and ask their director straight up. Will contemplates as we hit the Title Card.

We then see Will in enemy territory, as JAA looks like a Bowdlerized take on OZ, but with more singing. After Will gets an ID badge and patdown, we cut to the warden I mean the director, Grace Hitchens (Eve), dealing with a bank robber who pickpockets Will on the way out. Will states why he's there, Hitchens immediately accuses Will of stereotyping, saying they're more ramshackle than ND is, which to be fair is saying something. Hitches says they won't risk cheating, then reveals she had spies at the invitation six episodes back, so they're confident they can take ND. Will then apologizes by offering JAA the use of the McKinley auditorium; we then cut to ND in said auditorium. JAA commences with the Destiny's Child as ND sit aghast, overwhelmed by the mass of undulating buttocks.

Of course, Rachel then rubs in the mistake Will made by dismissing the performance as "hairography" a form of smoke and mirrors; frizzy hairstyles distract from lukewarm routines. Will ponders as we cut to him entering Glee Central with a new number, the theme from Hair. Will clearly heard only one word Rachel said. Finn accurately asks, after Puck points out his 'hawk, if they should have more hair. Will produces the wigs. Rachel wonders about the hairgel between the ears, saying they don't need "hairography" only for Will to reveal his being rattled by JAA. After the admittedly funny visual of the ND men in their new attire, we quickly cut to Quick, Puck giving Quinn a book called "How To Raise a Baby on $5 a Day". Quinn says it's sweet, but is so overwhelmed she doesn't know what to do about the baby. Puck offers no pressure as Quinn V/O's about how she needs acceptance, all the pressure she's under is getting to her, specifically by a certain escaped mental patient Will still shares a roof with. Yes, Terri is still pressuring Quinn to give her the child, but more than ever, Quinn is seriously starting to regret it. She then figures maybe it isn't that she wants to give the kid up, but that she doesn't wanna raise it with Finn. Puck looks at her with longing in the eyes as Quinn decides to give Puck a chance. To do that, she needs to distract Finn, and what better way to do it than with Rachel... that came out wrong.note  Or did it?

Turns out, fashion is the key as Quinn consults the resident guru. Kurt says Rachel dresses both as infant and elderly simultaneously, so it would be an uphill battle. We then get a visual as we see Rachel in a 70's style pantsuit that is just... no. Quinn then plays the ego, saying a makeover could get Rachel humbled in the judge's eyes. Kurt agrees. After the break, we cut to Terri and Will in bed, a pillow between them. Will tries for coupling, only for Terri to turn feral, apparently the pillow was so Terri wouldn't chance Will seeing the lack of baby bump. Will says once the child arrives it'll be all worth it, Terri getting a V/O for once as she says the clock is ticking and she needs more time.

In Rachel's bedroom, we see Taskmaster Hummel rip the brows off the eyes, then insult Rachel's personality and taste in decor. Kurt complements the performing, but all other aspects aren't all that good. Rachel wants to know what Kurt has in mind; Kurt wants to broaden her appeal, but when Rachel says she'd like to impress Finn, you can see the daggers in the peepers. Kurt then decides to invoke the film Grease and once again, we spot the inevitable from a mile away.

In a parking garage, Terri leads a tie-blindfolded Will to The Alleged Car, similar to the one that took the both of them to prom. Terri thinks Will working on it would be a good distraction as Quinn arrives with Terri's equally insane sister Kendra. Turns out, Quinn told Kendra she's having second thoughts about giving Terri the baby. Cut to Will's office where he is apologizing to Haverbrook choir director Dalton Rumba for not inviting the Haverbrook glee club to McKinley. Rumba is not hearing it and reads Will the riot act, all while Rumba's phone rings; turns out he's deaf in one ear. Will arranges the performance as we go to break.

We return with Terri contemplating telling Will the truth. Don't worry, he finds out next episode. Of course, Will arrives soaked in grease and masculinity and this causes Terri to demur. Kendra, who is more insane than Terri, has a plan to make sure Quinn gives her kid up; have her and Puck babysit Kendra's offspring and be driven to surrendering the child.

We cut back to McKinley and oh we have eyes full of legs as Rachel arrives in a Little Black Dress, the first time we see Lea Michele show off the bod. Finn notices and has to reboot his mental processor, which should take infinity. Rachel invites Finn over and you'd need about a million towels to clean up the drool. Finn then runs into Quinn who absently gives the okay for Finchel; Quinn then runs into Puck and asks him to help her babysit and all the distractions seem to be working.

In the choir room, Will's been getting questions about "hairography" and thus has Brittany teach it; turns out it's a Actor-Inspired Element. This is also a rare occurrence of Brit-Brit letting the hair down while still in Sue's colors. Britney compares "hairography" as "cool epilepsy". Brit, you are a treasure. All of ND whip their hair back and forth, minus Rachel as we cut to Sue observing and looking perturbed, Will spotting her and confronting her on spilling the set lists. Sue, as she is won't to do, undercuts Will by accusing him of using "hairography" to hide ND's percieved faults, threatening to be put back as co-director if "hairless" set lists aren't sent to her. The rest of ND look on, once again being caught in the crossfire. Hell, even Brad looks forlorn.

Rachel's room. Mentioning Grease in regards to makeovers only leads one way and sure enough, Rachel appears in full "Sandy in the last act" regalia. After an aborted second attempt at "You're The One That I Want", it turns out this was Kurt's plan all along; seems Finn likes girls with minimal makeup, and dismisses Rachel as a "sad clown hooker", afterwards admitting for the first time that he does indeed like her. Rachel is shaken up by the whole thing.

Speaking of being shaken up, we see Kendra's tiny terrors, followed by a tied-up Quick. Seems Puck suggested Cowboys and Indians and made the mistake of being the Indians. After accidentally holding hands in the midst of freeing themselves, Puck suggests bringing out the acoustic to calm them down; this leading to some situationally appropriate Madonna. It is in the midst of this that we see lots of eye contact; as mentioned before, they admittedly to make for a cute couple. After the kids are put to bed, we see Kendra and Terri aghast at Quick's skills before we cut to Will and Kendra's husband sharing beers, Will happy about the car, only for Kendra's husband to bring Will down to reality by pointing out it's not a kid-friendly car. Meanwhile, Quinn and Puck leave, Quinn surprised at how she enjoyed the job, while Puck says this means they've got this parenting thing down.

Kurt's locker. Rachel confronts about the makeover and Kurt makes the mistake of gloating, tipping her off to Kurt's own feelings. When Rachel then tries to remind Kurt that Finn's straight, it goes through one ear and out the other, Kurt throwing both of them under the bus by saying they're both distractions for Fuinn.

And now, for a moment that will become Hilarious in Hindsight a season or thereabouts from now. Santana warns Quinn to stay away from Puck. Yeah, see, when they're were tied up at Kendra's, Puck was supposedly texted by Mike about his wig; turns out, while Noah honestly wants to help Quinn raise their child, the libido sadly will override everything else; the text was in fact a sext from Santana. See, once again, we remind you that pissing off someone with an acid tongue is bad enough. Breaking their heart, especially when they're carrying your kid? That's a level of stupid that later events will prove to be only found in the Glee writers room.

Choir Room. The Haverbrook choir is sitting down to watch ND perform, and it turns out that when in doubt? You mash it up. Yep, wigs a plenty, ND break out the Hair mixed in with the Beyonce. Afterwards, it's ND's turn to watch Haverbrook perform and they go right for the spoken John Lennon. ND are in awe, enough to fill in the vocals.

We then cut to Quinn on the warpath. Finding her target, she confronts Puck, who is not even trying to hide his wandering eyes, about the alleged sext, grabbing his phone to confirm. Upon confirmation, Puck pathetically tries to invoke I'm a Man; I Can't Help It and of course that is the LAST thing Quinn wants to hear, as she decides to reaffirm her decision to give Terri the baby. Quinn then tells Will he'll be a good father. Will then takes Terri to show that he traded in the fixer-upper for a family van. Terri is touched, but still worried as we cut to a forlorn Quinn. Finn sees her, confesses going to Rachel's but says nothing happened, reaffirming that he wants to be with her. Two episodes from now, this will all be the most bittersweet. To drive it home, we see Rachel and Kurt observe, their own faces saying it all.

We begin the home stretch with Will apologizing to Sue for the "hairography", swearing that the Sectionals performance will be simple: them on stools. Sue then hands the new set list over to Haverbrook and JAA, when Hitches objects, Sue points out that with their comparatively dubious reps, that a Sectionals win will boost their standings. Seems the Reverse Sue-cology in this case is never to let anything distract you from winning. And thus, we conclude the first half of Season 1 with Tina taking the vocal reigns as ND show off their "True Colors", Rachel/Finn/Quinn/Puck/Kurt all staring at each other forlornly and longingly and all other "-ly" words you can think of.

Next Time: The inevitable revelation of Terri's pregnancy, leading to a Out-of-Character Moment and Will almost costing everyone everything.

Songs appearing in the episode

Tropes appearing in the episode