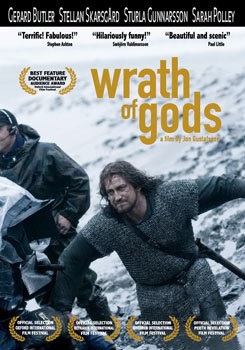 Opening narration: Eary july 2004. After 6 years in development Sturla Gunnarsson has arrived in Iceland to make an epic movie called Beowulf & Grendel, and on this beautiful summer day no one can see anything wrong with shooting this movie on top of a mountain facing the open Atlantic.
Advertisement:

Wrath of Gods is a 2006 of Icelandic documentary by Jon Gustafsson that chronicles the troubled production of the 2005 film Beowulf & Grendel. Following several years of development Sturla Gunnarsson has finally financed his dream project: an epic adaptation of Beowulf to be shot in his homeland of Iceland after a career in Canada. However, as production draws near problems with said financing ends up postponing the filming causing it to eventually start filming in autumn as the weather is getting increasingly worse.

At the start of filming Hilmar Örn Hilmarsson, high-priest of the Icelandic Ásatrú Association, is hired to perform a pagan blessing on the film. Within minutes of the blessing Sturla Gunnarsson trips and hits his head on a rock. Not long after, Hilmar Örn Hilmarsson also trips and fractured two rib bones. As filming starts, the cast and crew start to question what they actually might have called down upon the production...

Wrath of Gods provides examples of the following tropes: