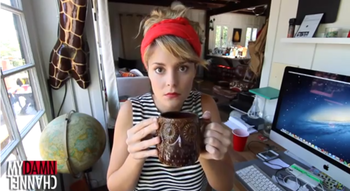 The show began on MyDamnChannel and migrated primarily to YouTube, where it found a loyal fanbase before Grace's contract expired at the end of 2013. She continues daily vlogs on her own YouTube channel, It'sGrace.

It's examples here on DailyGrace and you know what that means!: