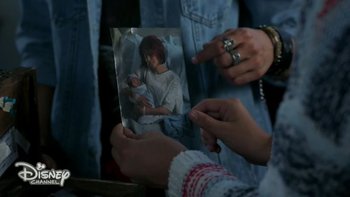 Andi Mack is a teenager Kid Com that practically runs on Wham Episodes. Here are a few examples.

13: Bex reveals to Andi that she was actually her mother, rather than her older sister, like she previously thought. When the pilot episode out of all things, is a Wham Episode, you know the show will get it's own page. It's the page image for a very good reason.

Outside The Box: Buffy and Celia find out that Bex had a "secret baby", which turned out to be Andi. Andi then explains to them Bex was actually her mother.

Dancing In The Dark: The entire town finds out the truth about Andi's "maternal" relationship with Bex and Celia.

She Said She Said: Bowie comes to the Mack house and is introduced to Andi. They were both shocked to find out about their relation.

She's Turning Into You: Bex and Andi move to a new house only to move back in the next episode.

Best Surprise Ever: Bowie returns to Andi's life and plans to propose to Bex, Buffy and Marty realize they value each other's company, Jonah dumps Amber and takes back Andi's bracelet, and it's implied Andi likes Jonah. It's also implied that Cyrus likes Jonah as they both look back at him.

Hey, Who Wants Pizza?: Jonah and Andi like each other and start hanging out. Cyrus - shortly after his first kiss with Iris - realizes he is jealous of Andi and has a crush on Jonah and tells Buffy, coming out for the first time. Bex decides to not get married to Bowie. Also, it's revealed that Amber's dad lost her job and she needs to earn the money in order to help support her family. She tells Jonah and makes him promise to keep it a secret.

Friends Like These: TJ is introduced. Buffy gets onto the boys’ basketball team. Cyrus realizes he isn’t interested in Iris or girls in general.

You're the One That I Want: Miranda debuts in this episode, and starts bonding with Bowie.

Miniature Gulf: It's suggested that TJ might have a learning disability. This is confirmed in Cyrus' Bash-Mitzvah! TJ and Cyrus bond for the first time. It is revealed that Miranda has a daughter.

We Were Never: Jonah reveals she never saw Andi as a girlfriend, and Amber forced him to called her his girlfriend. Buffy’s mother returns home from deployment.

Cyrus' Bash-Mitzvah!: Cyrus reveals to Andi that he also likes Jonah as a attempt to make her feel better. Jonah starts to realize he was losing Andi and starts becoming prone to panic attacks. It's confirmed that TJ has a learning disability. Walker is introduced for the first time.

Crime Scene: AndiShack!: Andi is introduced to Miranda and her daughter Morgan for the first time. Buffy and Cyrus find out about Jonah's panic attacks.

Andi's Choice: Jonah expresses his true feelings about Andi to her in song during his performance, and the two of them kiss for the first time.

The Cake That Takes the Cake: TJ apologizes to Buffy, Buffy announces her plans to start a girls’ basketball team, and it’s implied TJ likes Cyrus when he looks back. Bex plans a proposal with Andi to Bowie. The Renaissance Boys ask Bowie to tour with them and he finds the ring in the cake.

The Ex Factor: It is revealed that Jonah’s family are having money problems and have lost their home. Jonah and Amber kiss, implying they are back together. Miranda gives Bex cold feet about getting married.