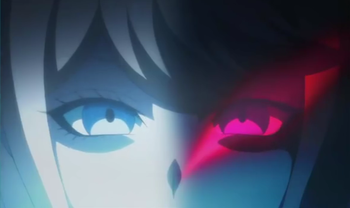 "Hope is harmony. A just heart, moving toward the light. That is all. Despair is hope's polar opposite. It is messy and confusing. Despair swallows up love, hatred, and everything else. Because not knowing where you will end up is despair. Despair is what even you cannot predict. Only despair's unpredictability will save you from a boring future."

Darker and Edgier than the previous installments, the anime shows more ways of inflicting horror and despair.

open/close all folders
Side: Future
Side: Despair
Side: Hope