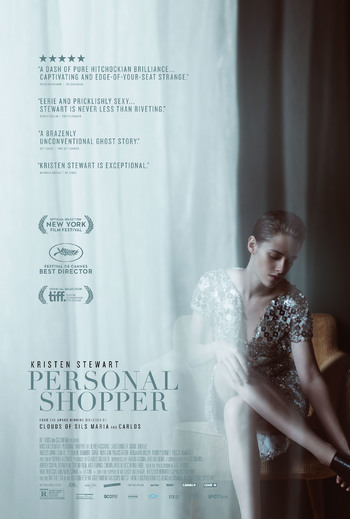 Maureen (Stewart) is a personal shopper for a wealthy socialite in Paris. Her twin brother Lewis has recently died from a rare heart condition that she also shares, and she's stuck "waiting" for a specific event to happen: a sign from him beyond the grave.

In addition to their shared heart condition, both siblings could also communicate with the dead. In the event of his hypothetical death, Lewis promised Maureen that he'd send her a message that he was at peace, thusly allowing her to move on from her loss. It's been some time since he died, and she's still waiting.

Between juggling her job as a personal shopper and moonlighting as a medium, Maureen is also forced to deal with an abhorrent admirer contacting her through texts from an unknown number, who may or may not be Lewis himself.

Sanity slippage ensues, and Maureen's inability to accept Lewis' death (or communicate with his spirit, rather) leaves her desperate for closure, even if it means wallowing in a job she hates in a city she completely anonymous in.

Personal Shopper is the second collaboration between Assayas and Stewart (following 2015's Clouds of Sils Maria), and won Best Director Award at the 2016 Cannes Film Festival.