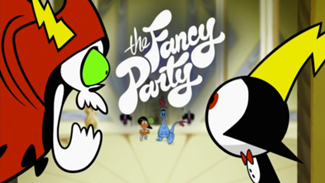 Or Swanky Shindig, as Wander calls it.

The Fancy Party begins on a planet surrounded by ships.

We zoom in to the banquet room where an uncomfortable, formally dressed Hater sits amongst a bunch of villains — Emperor Awesome, and a bunch of heretofore unseen villains across from an extremely old, wrinkled, and sickly woman: Queen Entozoa. She announces that she’s gathered them all for a reason — she’s dying and wants to choose an heir to inherit her thousand year empire. One of the villains makes a weaselly quip about how she can’t possibly be older than 400. The queen waits a second before having the unnamed villain dragged off for his remark, which she considers desperate. She announces she DESPISES desperation. There are pink beams and screams behind the doors.

The door flies open and Wander arrives, with Sylvia, apologizing for being late, chiding her that she said they wouldn’t know anybody. Hater gapes in astonishment as the queen not only greets Wander warmly but invites him to sit right beside her. Sylvia settles in and begins eating everything in sight, pausing only to shoot Emperor Awesome down when he tries to hit on her. The Queen chatters happily about how Wander is the most wanted fugitive in the galaxy, ignoring Hater pointing out that this is only so because Hater himself declared him so. Hater prepares to attack, but Peepers tackles him and drags him off to the restroom, where he reminds Hater that he can’t destroy anyone at a fancy dinner party. It’s extremely rude, and the Queen is a stickler for manners.

After an uncomfortable moment with the inexplicable BLACK CUBE, they return to the party with Peepers having promised to handle Wander, leaving Hater to just be the perfect gentleman in order to win over the queen. Wander is complimenting the queen on her evil castle, all sincerity, and the queen is delighted. Hater attempts to interject himself into the conversation, only to be scolded for sucking up. Dinner is served, and while Hater has to recite a mnemonic to remember his fancy flatware, Wander doesn’t bother, eating with his hands instead. The queen is charmed by Wander’s devil-may-care attitude. Hater begins to show his temper, but Peepers intervenes, seeking to blast Wander under the table. Sylvia snatches him with her tail and smashes him against the underside of the table.

Hater attempts to be entertaining with an anecdote, but Wander incessantly interrupts to ask “why”, so Hater loses his temper — again. Cue the crickets at the outburst, immediately upstaged by Wander balancing a spoon on his nose to the amusement of all.

Hater is firing up for another rage outburst, only to be interrupted by the servants announcing dancing. Wander takes off for the restroom. Peepers, who was in there treating Sylvia-related injuries, blasts the door to weld it shut. Hater takes his chance, and serenades the queen, who begins to warm up to him. As she begins to tell him she’d like to choose him as the heir, Wander returns, outfits the fancy musicians with fun instruments and has them whip out a ragtime number.

Peepers tries again for Wander, but Sylvia is there again, and forces him to stare at the BLACK CUBE. While Peepers is having his soul sucked out by the The Dark, Hater cuts in again, but his dancing is too energetic, whipping the ancient alien queen around the room with unsettling bone-cracking noises. He is convinced he’s doing well until he sees the other villains staring aghast. Desperate to save the moment, he kisses the queen.

She pushes away, disgusted: “What are you doing? I’m one thousand years old!” Still desperate, Hater makes the mistake the first villain made — he cheesily tells the queen she can’t be older than 400. The queen is enraged by yet another display of weakness. She declares the party over, and says she’s made her choice; the other villains begin to file out. Hater is dragged off, protesting that if Wander inherits, he’ll use the power for good rather than evil.

Wander is innocently unaware of what he’s about to inherit, but before anyone can explain, the servants and guards are all blown in with the door on an evil green explosion. Hater has had it: he storms back in explaining he is not the perfect gentleman, and when he wants something he takes it. He hovers above the queen and demands she bequeath him her power.

To his surprise, she says “Okay.” While Hater is gaping in astonishment, the queen reveals her true self: an alien parasite that has been inhabiting the queen and who now needs a new host. Hater tries to back off, but the parasite inhabits him.

Wander, all this time unaware that he was competing with the villains, sees Hater trying to force the intruder from his body and takes it as Hater choking on something from the banquet table. He gives Hater the Heimlich maneuver, which forces the parasite from Hater’s body and launches it across the room. The other villains all dive away, and the evil parasite ends up in a finger sandwich Sylvia was holding. Recognizing it as evil, she backs away and runs. Hater snatches up Peepers and runs as well. Wander cheerfully says “Heckuva party” to Hater, and Orbbles off with Sylvia. The Hatecraft takes off as well.

Emperor Awesome puts the mack on the now-sentient sandwich, only to get blasted for his efforts. The parasite, livid that it’s now in a sandwich for a millennium, swears vengeance.

Tropes appearing in "The Fancy Party" 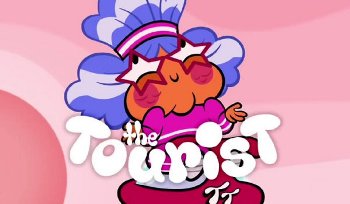 "Not that it's a contest; that'd be Silly Willy. But if it was, I'm winning."

Wander gets a little over-competitive when he meets Trudy Traveler, a fellow space tourist who's seen more of the universe than he has.