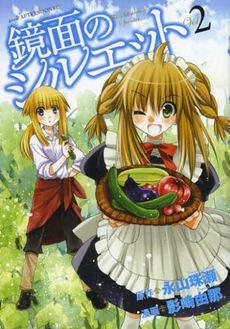 Who's the boy here?note The Meido
Kyoumen no Silhouette (Silhouette in the Mirror's Surface) is an ongoing manga by Tamase Nagayama in collaboration with Yuna Kagesaki in the drawing department, published in Kodansha and serialized by good!Afternoon.
Advertisement:

Elna is given the great responsibility of taking the throne of a small country when her father fell very ill. Since such a burden is too much for a 15-year old girl, her father give her the advice of "look for her shadow", a double who posses the same face as her to protect her aside of give her the courage to live.

Teshio is a farmer boy who has the disgrace of having a female-looking face and being thin as a straw and not just being unable to have a girlfriend but attracting perverted men instead. His life changes when commander Naoe takes him with her (aka kidnapped him) to be Elna's shadow since both are like two drops of rain.

But Fate likes to play jokes: Elna is scared to death of men and Teshio hates the idea of being in girls clothes (aside of putting his life in risk). Now both have to overcome their weaknesses and try to make this work.