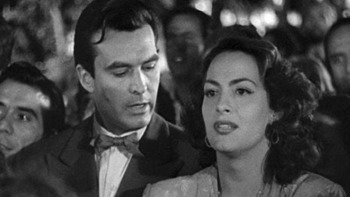 Chains (Catene) is a 1949 film from Italy directed by Raffaello Matarazzo.

Guglielmo and Rosa are a married couple in Naples, with two children. Guglielmo runs an auto repair shop, which is why a hoodlum with a stolen car stops at his shop after the car conks out on the road. Guglielmo tells the hood that he lacks the necessary part so he won't be able to fix the car until the next morning.

The hoodlum reports to his boss, Emilio, who is appalled to hear that his flunky dropped off a stolen car with a mechanic. The two go back to the shop, part in hand, but Guglielmo has gone out for the evening. They knock on the door and are greeted by Rosa—and both Rosa and Emilio are shocked.

It turns out that a long time ago, before the war, Emilio and Rosa were lovers. Emilio got inducted into the army, survived the war, and instead of coming home to Rosa crossed the globe having a series of criminal adventures. Emilio is powerfully attracted to his old girlfriend, even though Rosa tells him that she loves her husband. Emilio winds up staying in town and pretending to invest in Guglielmo's business, as an excuse to stay close to Rosa. He demands that she leave her husband and run away with him, and he won't take "no" for an answer.