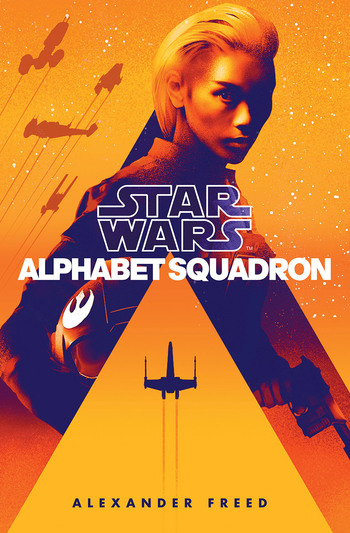 Victory has a price.
Advertisement:

Alphabet Squadron is a Star Wars Expanded Universe novel written by Alexander Freed (Battlefront: Twilight Company, Battlefront II: Inferno Squad), and the first installment in the Star Wars Alphabet Squadron Trilogy. Set after Return of the Jedi, the novel follows five current and former rebel pilots, each one piloting a different rebel starfighter — an X-Wing, a Y-Wing, an A-Wing, a B-Wing, and a U-Wing — who are tasked by New Republic General Hera Syndulla and Republic Intelligence to hunt down a mysterious TIE fighter squadron known as Shadow Wing.

After the destruction of the second Death Star, Yrica Quell finds herself locked up in a Rebel POW camp with a broken arm, endlessly interrogated by a "therapy droid," and waiting for the war to end. Once a pilot with the prestigious 204th Imperial fighter squadron Shadow Wing, Yrica deserted after being ordered to participate in Operation: Cinder - a genocidal strike ordered by the Emperor in the event of his death. Cinder strikes loyal and rebellious systems without distinction, killing billions of sentient beings. As Yrica waits to learn her fate, she is approached by Caern Adan from New Republic Intelligence with news that Shadow Wing is still active and causing significant damage to the Rebellion. Knowing that her former allies have participated in Operation: Cinder, killed untold millions in their first strike alone, and are still fighting for the Empire, Yrica agrees to fight for the Rebellion and help Caern form a new squadron of pilots under his command. She'll even get to fly again, but this time in a Rebel X-Wing.

Yrica has her work cut out for her, though. Her only prospects for forming a squadron are the mysterious and masked female Kairos in her U-Wing, the unscrupulous and experienced Y-Wing pilot Nath Tensent, the idealistic but hopelessly bad shot Wyl Lark in his A-Wing, and the death-seeking survivor of a Shadow Wing strike Chass na Chadic in her B-Wing. Their personalities clash as much as their starfighters, and Yrica doesn't have much time to whip the squadron into shape before Shadow Wing will be ready to launch new offensives against the Republic...