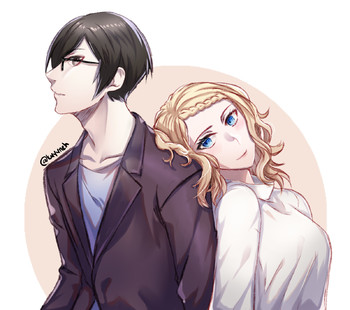 Original Character Kosuke Nakahara life's life is fairly average: she and her family live in the mountain town of Karuizawa in a restaurant owned by her mother and stepfather. Unfortunately for Kosuke, it can't be denied that she's a very, very lazy person, which starts to raise concerns with her loved ones: especially her mother, whose relationship with Kosuke is already tremulous. When a sudden tragedy strikes the family, Kosuke has to step up as caretaker. More and more problems arise, only increasing Kosuke's desperation to keep her family provided for.

Kyoya Ootori has finally been given the opportunity by his father to break out of his role of "third-born son" and prove himself as a worthy addition to the family business. On top of this opportunity wearing him to the bone, Kyoya is also currently dealing with a heart split in two different directions—a fact that annoys him to no end. Though Kyoya has always wanted to prove his loyalty to the family name, but the chance comes when financial disaster strikes the company.

The two enter an arrangement as their only way out of their situations, and though neither are happy about it, time might prove they can work something out.

The story is available here

. It is currently in-progress and currently slated for more than sixty chapters. The first eight chapters serve as the story's prologue, with the story proper picking up around the ninth chapter.

The art pictured to the right was commissioned by lipasnipis