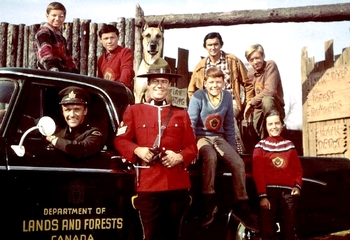 The Forest Rangers was an iconic Canadian television series from the 1960s. It was the first Canadian series filmed in colour. Lasted from 1963 to 1965. A total of 104 episodes in three seasons.

Orphan Chub Stanley is sent from Toronto to live with a new foster family in the small Northern Ontario town of Indian River. This city boy is not happy to have been sent out to the boonies, but he soon makes friends with a group of local kids, in their club "The Junior Forest Rangers", which is based in an old Hudson Bay Company fort.

None of these kids have parents that we ever see, but there are some adult Reasonable Authority Figures in their lives, including Chief Ranger George Keeley, older brother of Peter, who is the Jr. Ranger club leader, RCMP Constable Scott, played by Gordon Pinsent in his first role, and local Metis-Ojibway guide Joe Two Rivers.

The kids of the club have various adventures from the mundane, to the extraordinary, sometimes guiding city slickers on camping trips in the woods, and other times chasing after bank robbers who thought it would be a good idea to hide out in the woods.