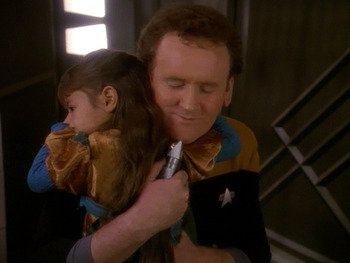 O'Brien's not only a good engineer, but a good dad as well.
Advertisement:
Season 1

If Wishes Were Horses

In The Hands Of The Prophets

Through The Looking Glass

The Die Is Cast

The Way Of The Warrior

The Sword of Kahless

Looking For par'Mach In All The Wrong Places

.. Nor the Battle To The Strong

Let He Who Is Without Sin...

The Darkness And The Light

In Purgatory's Shadow / By Inferno's Light

Ties Of Blood And Water

Soldiers Of The Empire

A Time To Stand

You Are Cordially Invited

Who Mourns For Morn?

Far Beyond The Stars

Wrongs Darker Than Death Or Night

In The Pale Moonlight

The Sound Of Her Voice

Tears Of The Prophets

Image In The Sand

Take Me Out To The Holosuite

Treachery, Faith And The Great River

Once More Unto The Breach

It's Only A Paper Moon

The Changing Face Of Evil

Tacking Into The Wind

The Dogs Of War

What You Leave Behind

(Has its own page.)
Unsorted