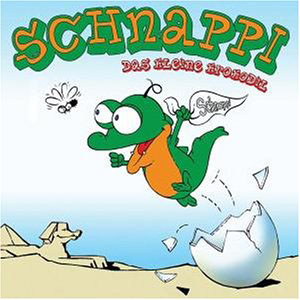 Schnappi was a character in a popular animated German children's TV show called Die Sendung mit der Maus (The Show with the Mouse). In the cartoon in which he appeared, Schnappi is seen singing a song about his life in Egypt. That song, which is sung in German, has a catchy tune and simple lyrics.

The song, which first appeared in the Die Sendung mit der Maus show in 2001, was written by Iris Gruttmann and performed by her then-six year old niece, Joy.

It got more and more popular while playing on the Internetradio RauteMusik. The moderators and listeners often played that song before it got released on CD. In December of that year, the song "Schnappi, das kleine Krokodil" was released on CD. The single reached #1 on the German Pop-Charts on January 3, 2005.

A bootleg translation into English was recorded and released on the Internet on 20 February 2005 by the Bronx artist DJ Damien. Despite being an unofficial cover, this version was made available on the official Schnappi website. The original recording artist was said to be very glad Schnappi made it to England, referring to the English version in an interview with The Guardian newspaper. Other translations by collaborations involving DJ Damien include a French version "Crocky le Petit Crocodile", Lithuanian "Å napis maÅ¾as klokodila" and a forthcoming Japanese version "Togetogeshi, chiisai wani" (刺々し、小さい鰐).

The song reached number one in Germany, Austria, Switzerland, Belgium, The Netherlands, Norway and Sweden, whilst reaching the top 10 in Australia and New Zealand. The song was released in the UK on Monday 3rd October 2005, but it only reached the bottom end of the (usually very novelty-friendly) UK Singles Chart top 40.

Alternative versions of the song - varying from simple remixes of the basic vocal track, to a full cover version by Belgian techno group Dynamite - were also at numbers seven and ten in Belgium, and at number two in the Netherlands.

Ironically, the song was never meant for export and was cut from the export (Australian) version of "Die Sendung mit der Maus" (like all the other songs on the show), but managed to find its way out of Germany anyway via Memetic Mutation.

The track was also sampled in a Benny Benassi song.

A licensed Minigame Game was released in mid-2005 for the original PlayStation, and was the very last official release for the system.

A flash movie, Up Skit Creek Vol. 2 by Andrew Kepple, features an animutation version of Steve Irwin (The Crocodile Hunter), stalking Schnappi and eventually trapping him in a strong grip- evidently too strong; Schnappi's neck "schnapped". Steve Irwin referred to him as "the little German bugger who won't shut the hell up!" in layman terms.

Schnappi has been frequently referenced by Michael J. Nelson and company in several of the RiffTrax commentaries.