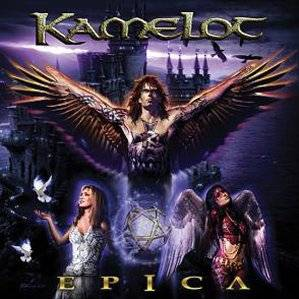 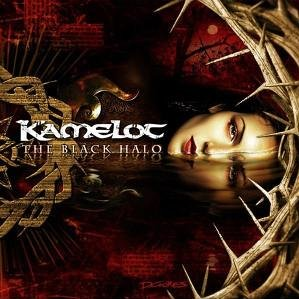 The Black Halo
"Why did God make me feel there is more to be answered?"
—Farewell
Advertisement:

The Epica saga is a series of albums by American progressive power metal band Kamelot, consisting of the two succeeding releases Epica and The Black Halo, released in 2003 and 2005 respectively. The story they tell is loosely based on Faust.

The story kicks off as a man named Ariel decides to leave his hometown and search for the answers to the profound questions of life, such as the purpose of his existence and how he can find eternal peace and happiness. The place he seeks to find – where all of his questions have been answered and he has found happiness – is called Epica.

But the quest turns out harder than expected. He quickly loses his way, indulging in opiates in hope to numb his will to question through intoxication, although that state never lasts long. He falls into depression, longing for the loved one he left behind, Helena. Just in this moment, Mephisto the archangel appears before him. He offers him a deal – he shall have everything he longs for, but in return, he has to give him his soul when he dies. To convince Ariel, he shows him his very own castle. After seeing all the things Mephisto has to offer, he accepts the deal, but with one restriction: Mephisto will only have his soul if he reaches one moment of pure peace and happiness in his life.

Later that night, he unexpectedly meets Helena again. They get together again, yet he lies to her since he doesn’t want her to know that he has made a deal with what appears to be the devil in disguise. Eventually, Ariel, still striving for the answers to his questions, decides to leave her again for a second journey. The night before the day he plans to leave, Helena thorws herself into the river nearby the town, killing herself. Ariel finds out about it the next morning and falls into deep depression. He considers throwing himself into the same river. Mephisto - who still hasn't managed to make Ariel happy and would lose his soul to God's mercy if he died - talks him out of it. Helena watches from the heavens and tries to call for Ariel and comfort him, but he doesn’t hear her in his grief and anger towards God.

In an attempt to make Ariel forget the loss of Helena and therefore make him happy, Mephisto lures a lonely town girl named Margerite. He brings her to Ariel, who has since become a shell of his former self, ridden with regret. After spending the night with Margerite, Ariel realizes that his feelings haven't changed - he will only ever be able to love Helena, so he leaves Margarete. He leaves the town to continue his quest for answers, leaving her behind to never see her again. As he crosses the now frozen river in which Helena drowned herself, Helena once more tries to reach out for him, but he once more doesn’t notice her.

He lives as a hermit, wallowing in his pain and regret, often being close to a Freak Out. Then, on a moonlit night, he realizes that his deal with Mephisto was the root of all evil and that he can only make amends by confronting him (and his own demons at the same time). He sails back to Mephisto’s castle, where he chases the demon out, recognizing his own failings and that he must atone for them. After that, he once again ponders about life and existence and finally comes to a conclusion: The only times he felt happy were those when he was with Helena, so in a sense, she must have been his Epica. With this, he realizes that „love is the only truth“, making him hope that he one day will be reunited with Helena in heaven. The thought of it finally makes him truly happy.

This, however, makes Mephisto’s deal comes into play, because now that Ariel has been truly happy for one moment, his soul is his to take. As Mephisto tries to take Ariel’s soul, Helena appears from the heavens, now finally able to interact with Ariel due to his willingness to take responsibility for his actions. She saves his soul, burning Mephisto. Ariel still dies, but in his last moments realizes that now he will get to be together with Helena in the afterlife.

Note: Since this concept story is told mainly via song lyrics (contrary to bands like Rhapsody of Fire who explain their stories in their booklets), there are several things (mostly details) left open to interpretation. For example, it's unclear whether Ariel is killed by Mephsito after his epiphany, or if he dies of some other reason way later on, making "Memento Mori" a Distant Finale. Interpretations may differ from summary to summary, so the one above doesn’t claim to be the only one.

The albums contain examples of the following tropes: