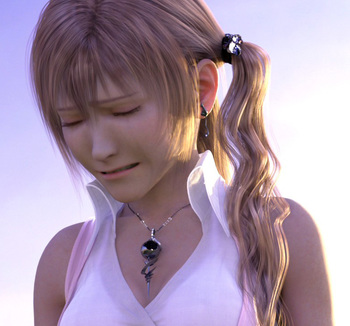 Please, don't cry Serah.
"I think it will be a shame if we won't be able to cry as we play our own game."
— Nobuo Uematsu on Final Fantasy VIII
There are times in the eye-wateringly popular Final Fantasy series that make people cry. It can be their Heroic Sacrifice, Dark and Troubled Past, Bittersweet Ending, and etc. Here are the list down below:
Advertisement:
Advertisement: