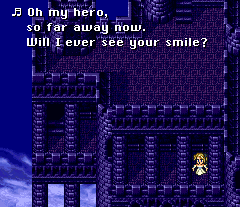 "Love goes away, like night into day.
It's just a fading dream."
"As we brought out a masterpiece to the world [...], we asked ourselves, "Can we really fight 24 hours?" And the answer was, 'We will fight 8,760 hours!'"
— Nobuo Uematsu on the music in Final Fantasy V
Advertisement:

A well-established JRPG franchise such as the head-bangingly popular Final Fantasy series deserves excellent soundtracks to go with them. Nobuo Uematsu is famous for having composed the soundtracks to many of these games, but other composers have come in from time to time to help round out the series' discography.

In fact, can we just say that the music has a game of its own and be done with it?...No?