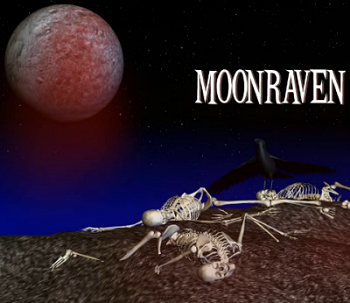 Scary stories to view in the dark.

Moon Raven is a YouTube-based creator of computer-animated horror shorts, most notably adaptations of stories from the Scary Stories to Tell in the Dark book series. The adaptions of the books premiered in February 2009, with original adaptations of more contemporary creepypastas (usually of Raven's own creation, although other authors were featured occasionally) appearing in July 2012.

Despite the "animation" descriptor, most of Moon Raven's videos tend to be collections of CGI-rendered still images more than anything else.

Viewers seem to be split between people who find the adaptations to be cheap-looking and narmy, and people who think they are good adaptations whose scariness factor is actually improved by the aforementioned minimalistic production quirks.

On August 9, 2018, Moon Raven posted her fiftieth and final animation, "The Heartless and the Wicked"

. The video was delayed for over a year, stuck in Development Hell due to her battle with an undisclosed illness. Accompanying the video was a heartfelt message to longtime viewers and fans thanking them for their support over the years and explaining that she is retiring the series to focus on living with her illness. Reactions were suitably thankful. Unfortunately, in December 2019, the channels were taken down for violating YouTube's policies, but Moon Raven and Chilling Tales for Dark Nights are working to get the videos archived on the latter's website.

, as well as the older one

. With the channels now gone, you can find re-uploads of the videos here