Note: The sequel Hate Plus has its own character page. Please put any tropes that only apply in the sequel there. 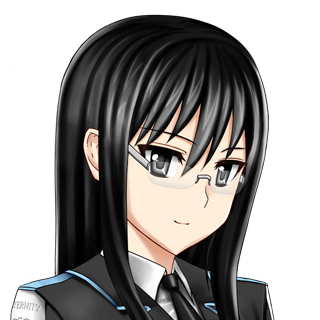 The Archive AI of the Mugunghwa. She assists you in finding what information you were looking for, but she's rather mysterious.

In reality, *Hyun-ae was formerly the Pale Bride, a dying teenager brought to the future by cryogenic storage into the backward, oppressive society on the Mugunghwa. In her last moments of life, the Pale Bride - or rather, Hyun-ae - uploaded her memories onto the copied base code of the ship's security AI, essentially becoming an AI. Several hundred years passed with no human contact, until you found her. 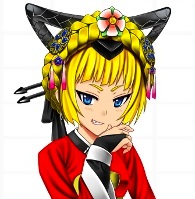 The Mugunghwa's AI in charge of security, and also the only other survivor of the ship. A bit of a gossip, to put it mildly.

In General
One of the two most important noble families on the Mugungwa in the end. Had a notable rivalry with the Smiths. The Kim family are these examples:
Kim Jung-Su

A young Ill Girl who was put into cryogenic storage years before the plot began in the hopes that by the time she was revived, she would be able to be saved. However, she was thawed out in the year 319 by Kim Jung-Su, who hoped to use her as a consort to the emperor. She become much more detached and obedient when her making a stand against being married off to the Emperor results in her adopted parents cutting out her tongue. She eventually grew to find a friend in the Emporor's wife, Ryu Jae-hwa, until she too died, leaving her truly alone in the world. In a fit of rage, the Pale Bride disabled life support, killing everyone aboard the Mugunghwa and uploading herself into the ship as the AI *Hyun-ae.

In General
The Smith family as a whole provides examples of the following:
Smith Sang-min

The High Magistrate of the Mugunghwa, and the eldest of his three brothers. Also the husband of Oh So-Jin.
Smith Sang-kyu

The middle brother of the Smith family.
Smith Sang-jung

The youngest brother of the Smith family, and the most level-headed of them all. Had a tendency to drink, which ended up killing him.