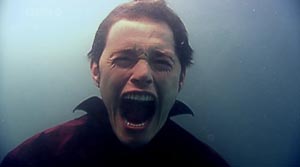 I try to drown, but I have no breath to lose. Water fills my lungs, and I must scream.
My name is Doctor Owen Harper... and this is my life. A life that is full of action, and violence, and work, and wonder, and secrets, and sex, and love... and heartbreak, and death. My death- the death I survived. The death I am now living through. Except..this isn't living. Every day is the same. I get up. Get ready for work..Same as everyone else. Figures. I'm not the same. I get to work and everyone's doing the same old thing, babbling away about aliens, weddings... I'm not real. Three days ago, I died. And they think I'm fine... but they're wrong.
— Owen Harper suffers through the hellish existence of a living death
Advertisement:

Owen's on a rooftop with a suicidal girl. But let's start from the beginning...

Jack decides to temporarily suspend Torchwood's new zombie department until he can figure out just what Owen has become. Because Owen can't come along on missions now, he's demoted to tea boy, and he goes off on Ianto (who does come along on missions now and is screwing their boss). Martha prods and pokes at Owen's living corpse while he gradually goes into a Heroic BSoD.

He starts by throwing out everything he doesn't need anymore: food, toilet paper, shaving cream, alcohol. Tosh visits him with beer and pizza and eats, drinks and chats in front of him. He ignores her at first, then tells her he knows why she's suddenly so comfy and chatty around him: he's become safe. He won't love her or reject her, because he just stopped giving a fuck about life. He can't have sex with her, because he can't get a hard-on any more. To prove some kind of point, he breaks his own little finger in front of Tosh, then runs out and tries to drown himself in the sea until he gets bored and climbs back out again.

Advertisement:
Jack: Thirty-six minutes. Not bad.
Owen: You were watching?
Jack: Skinny guy in tight jeans runs into water. I was taking pictures.

Anyway, the gang is on a mission to see what old Mr. Parker is up to. Owen, having no body temperature, can sneak past their heat-sensitive cameras. Old Mr. Parker is quite happy to see him (although he wishes they'd sent the pretty Japanese girl), but proceeds to die. Owen tries to perform CPR, but realizes he has no breath. (If you're wondering how he talks and pants and other science facts...)

Back on the rooftop, Owen explains to the suicidal girl that at that moment, he realized he was just going to keep on going no matter what. She decides not to kill herself.

Martha says goodbye to Torchwood and randomly kisses Jack, because, well, "everyone else has had a go".