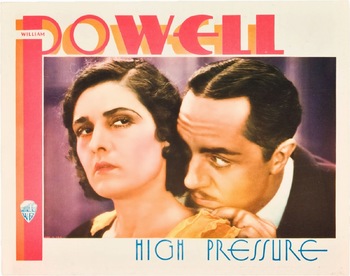 High Pressure is a 1932 film directed by Mervyn LeRoy.

Gar Evans (William Powell) is a Wall Street "promoter", a sort of hype man who promotes stocks. A guy named Ginsburg comes to him and tells him that he knows an inventor who has a process of making artificial rubber from sewage. (In Real Life, the first successful artificial rubber, neoprene, was invented around the time this movie was made.). Gar swings into action, creating a corporation out of nowhere, recruiting an army of salesmen, getting a hobo named Clifford Gray (Guy Kibbee) to pretend to be president of the company, and making the "Golden Gate Artificial Rubber Company" the hot new thing on Wall Street—all before they've actually made any artificial rubber.

Gar attracts the unfavorable attention of natural rubber companies, who in turn inform law enforcement. In fact, the only thing separating Gar from a pump and dump

con artist is that he believes that at some point his company will produce artificial rubber and the stockholders actually will make money. So when he finds out that the inventor who was supposed to make rubber out of sewage is both a fraud and a lunatic, he realizes that he's in a lot of trouble.