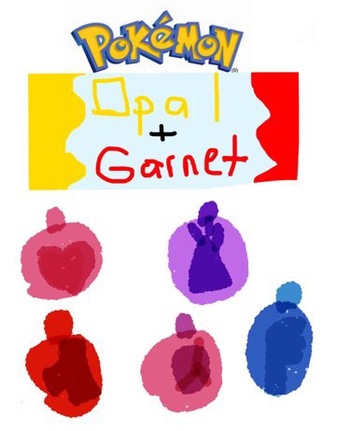 Imagine you have a Pokémon fanfic in the works, and you want it to be like no other Pokémon fanfic ever. So you add in a bit of elements from Digimon, My Little Pony: Friendship Is Magic, and The Hunchback of Notre Dame into the mix, then cap it all off with a Trainer whose father died of cancer and the Conlang of PokeLatin.

What you have, my friends, is Pokemon Opal and Garnet: A Pokémon Fanfiction which details the adventures of Kaylie Rodgers, a Pokémon Trainer who travels through the Feluv region with her 7 Pokemon, five of whom are named after characters from the Disney version of The Hunchback of Notre Dame. It was created in 2016 by tbbtfan. The link is here

With that, these are the tropes for Pokemon Opal and Garnet! Enjoy! (cue "Make It Shine" from Victorious)