Comic Book / Deadpool vs. The Punisher 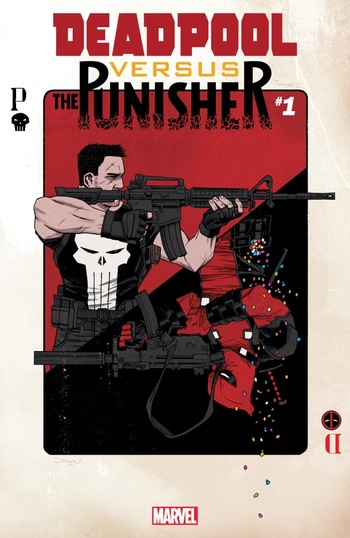 Makes Just as Much Sense in Context.
The Don of the Dead: You like to shout "Chimichangas," do you? Well, how about this— Fluffer-nutters! El Whopper with the special sauce! HOT POCKETS!!!
The Punisher: What is even happening?note A Dashing Hispanic with a skull mask is swordfighting with Deadpool. Yeah. This is that kind of story.
Advertisement:

Deadpool vs. The Punisher is Exactly What It Says on the Tin. A 2017 Marvel NOW! (2016) miniseries featuring the Merc with a Mouth duking it out with The Punisher.

One night, Frank Castle is shooting down the members of Club Vs., a bar where patrons bet on superhero vs. supervillain fights. As he is shooting down everyone in the vicinity, he gets intel on Simon Noonan Banks, otherwise known as "The Bank"; a man notorious for his funding of criminal organizations and their sprees.

The Bank also happens to have managed Deadpool's money since before his time at Weapon X and is an all-around good friend of his, so of course Deadpool's gonna take issue with anyone trying to kill him. However, when things escalate, Deadpool doesn't hesitate to hunt down The Punisher because of it.

But what if the Punisher is being set up?

This miniseries has examples of these tropes: