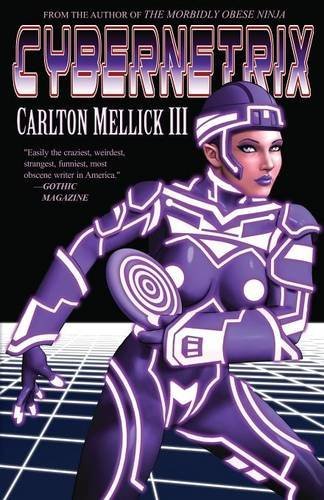 Cybernetrix
A bizarro parody of the movie TRON.
Advertisement:

Technology has advanced to the level where electronic alternate worlds can actually be created and entered by humans. The first such world created was originally supposed to be based on the electronic world from the movie Tron, but due to legal complications with the Disney Corporation the developers decided to base it instead on a B-grade ripoff film called Cybernetrix. Although the movie was a failure, the electronic world of Cybernetrix has become so popular that it has changed our culture forever.

There is only one problem: the Cybernetrix world and the real world seem to be slowly bleeding together into one reality.

Carlton Mellick III's Cybernetrix is a bizarro satire set in a future world where '80s fads never went out of style, where society has completely lost interest in art and creativity, where reality is so damned boring that fantasy is the only thing left worth living for.