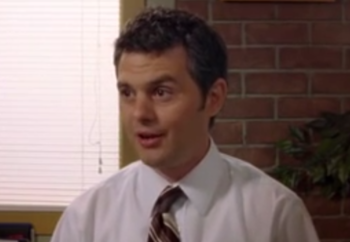 "Here are the books. I think you'll find they're very fiscal; I've prepared them in a fiscal manner, and I'm sure you'll be satisfied with the fiscalliness. I'll be over there, and if you have any questions, I am a Libra!"

A Plot: Karen has been assigned to create the "Percy Pedals" bike safety book for kids. However, she has a few problems: she can't draw, and she's not a great writer, either. She enlists Brent and Wanda's help, but their convoluted ideas end up taking the book in the wrong direction.

B Plot: Hank finds out he's not a Virgo, but a Libra. This has him convinced that he must live his life differently. First he takes over as Lacey's busboy after the original one suddenly quits, then he takes a job as an accountant for the town. In the end he learns that, Virgo or Libra, he's still Hank, which means he still can't hold onto a job.

C Plot: Oscar gets Davis to help him fix his roof, but a great argument breaks out when Oscar keeps knocking over the ladder, stranding them.