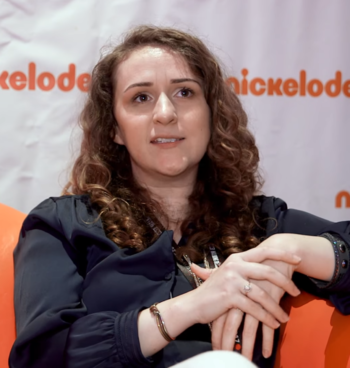 Francesca Marie Smith (born March 26, 1985) is an American former actress, best known for providing the voice of Helga Pataki in Nickelodeon's Hey Arnold!, along with various recurring and minor characters. Her other famous roles include Ashley B., Upside-Down Girl, and Swinger Girl on Recess.

Smith retired from acting sometime in the 2000s, but came out of retirement in 2017 to reprise the role of Helga in the Uncancelled Grand Finale Hey Arnold! The Jungle Movie, and would do so again in 2022 with three Nickelodeon crossover games: the mobile tennis game Nickelodeon Extreme Tennis, the Massive Multiplayer Crossover Nickelodeon All-Star Brawlnote via an update that added voice acting to the game; NASB was originally released a year prior without it, and the third installment of the Nickelodeon Kart Racers series.