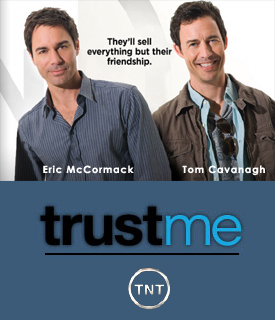 A TNT dramedy which premiered in January of 2009, Trust Me stars Tom Cavanagh and Eric McCormack as two advertising gurus in Chicago named Connor and Mason. The show focuses on their relationship with each other and their team once Mason is promoted while Connor is not. Side plots also revolve around the balance of work and family for Mason, and the newcomer to the team, Sarah Krajicek-Hunter and all of her neuroses. It proposes to be a character-driven drama and is in no way similar to another show on AMC.

As the show progressed, it started dealing with Mason's balancing act between work and family. His ambition is tempered by his agency's lack of new clients and loss of current clients, the latter of which may be partially his fault. Connor meanwhile struggles with his love life. Sarah also, but from a much different perspective as she deals with a divorce and reentering the dating scene.