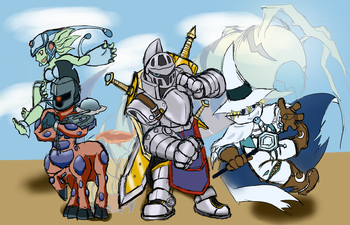 The Main Cast.
Digimon World: Infamy is a role-play based quest started on SpaceBattles.com based on aspects taken from many parts of the Digimon franchise. Players take control of a prideful Black Agumon on his journey to attain power and survive in the brutal Digital World. The story however takes a twist in that during his quest for power the protagonist gains companionship in a lazy but strong insect Digimon named Kunemon who is then killed by a former respected rival, Agumon, who had become a Greymon partnered with a Human child. From here the story becomes one of revenge, friendship, and even love as Black Agumon ("Coal") along with his ally and friend Impmon explore the world around them to become stronger while working to avenge their friend and accomplishing their various dreams and desires.
Advertisement:

The first thread can be found here

while the second thread can be found here

. The third and final thread can be found here

. It is also being converted into a fan-fiction story here

Warning! There are unmarked spoilers below so read at one's own risk!