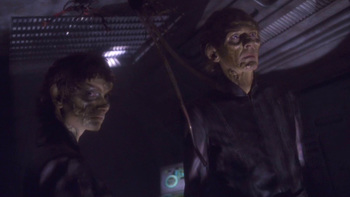 Vulcans = intimidating. Zombies = scary. Zombie Vulcans = WE'RE DEAD.
Archer carries an unconscious T'Pol to sickbay. When they put her on a bed, she starts shouting and threatening to kill Archer as Phlox restrains her. She screams and claims that Phlox will kill her like "they" killed "the others", then he puts her under anaesthesia.
Advertisement:

We cut to the previous day, where Trip is in the mess hall, expressing concern over the crew's morale. He suggests either reintroducing movie night or giving them medication. T'Pol enters and they begin talking, when Hoshi calls them all to the bridge, having gotten a Vulcan distress call and no response to her hails. They go to the bridge, and T'Pol recognises the source as a Vulcan ship called the Seleya.

They find the Seleya inside an anomaly-ridden asteroid field and discover that the asteroids contain trellium ore. Archer asks Hoshi to wake Malcolm and send him to the launch bay and Trip to get some ore, then he, T'Pol, Malcolm, and a MACO named Hawkins go into a shuttlepod and into the asteroid field. T'Pol reveals that she was once deputy science officer on the Seleya, only for it to be pulled into a "subspace eddy" and never heard from again. Meanwhile, Trip and Travis are beaming asteroids onboard to try to get at the trellium, but the transporter glitches out, causing the asteroids to materialise fused into the walls. Thus, they try to retrieve more asteroids in a shuttlepod while the transporter is being repaired.

The away team arrives at the Seleya to find the main power is down, the life support is barely up, and there are bio-signs but they don't respond to com signals. They board it, and Malcolm finds liquid trellium spilled on a bulkhead. They split up into pairs, and Malcolm and Hawkins find Vulcan blood next to a terminal. Archer and T'Pol hear someone knocking at a jammed door and open it to find a sickly-looking Vulcan man who attacks them with a blunt weapon. Archer pins him to the ground, then the Vulcan guy scratches him, and Archer and T'Pol both shoot him in succession, which stuns him.

As they try to take the unconscious Vulcan man back to the shuttlepod, Archer and T'Pol are attacked by more Vulcans wielding identical weapons, all of whom need to be phasered twice in order to pass out. Archer warns Malcolm, who is promptly attacked (along with Hawkins) by more feral Vulcans. They fight, which eventually leads to one of the Vulcans trying to strangle Malcolm, but thankfully Archer comes to the rescue. He suggests they retreat when more Vulcans show up, and Hawkins sets his phase-pistol on "kill" but is convinced to set it back to "stun". They head to the docking port, only to find two Vulcans with cold stares, who seal it off. Three Vulcans go in through the back door, one of them using a welding tool as a weapon, and the away team escapes up a ladder and closes a hatch.

Archer tries to contact Enterprise, but he can't. T'Pol says they might be able to contact Enterprise from the bridge, but it's seven decks above and there are 147 feral Vulcans on the ship. Malcolm suggests using one of the Seleya's shuttles, but the bay has been decompressed, so they head off to sickbay to treat the injured Hawkins. Meanwhile, Trip and Travis find a large asteroid and land on it.

In Seleya's sickbay, a Vulcan man jumps from the ceiling, who Malcolm stuns. He then starts treating Hawkins, when Archer asks who the Vulcan guy in the isolation pod is. T'Pol explains that he's Solin, the chief engineer, but begins losing control of her emotions. They go through an access tube (with T'Pol being a bit shaky) and find debris blocking the way. Archer and Malcolm squeeze through and Archer tells Hawkins to look after T'Pol. While Archer and Malcolm head to engineering, Hawkins gives T'Pol a drink of water and asks how Vulcans could be aggressive with no emotions. T'Pol explains that Vulcans do have emotions; they just suppress them, and that Vulcans, in fact, used to be extremely violent. Archer and Malcolm reach engineering, where Archer is attacked by more Vulcans. They knock them out, then call Hawkins and T'Pol over.

On the asteroid, Trip and Travis have gotten their box of ore, but then an anomaly causes the asteroid to change course and a larger asteroid moves towards them. Back on Seleya, Archer discovers the transceiver is down, T'Pol is even shakier, and Malcolm has encrypted the locking mechanisms on the doors.

Trip and Travis arrive back on Enterprise and Archer sends a com message, asking them to pick them up. Unfortunately, the shuttlepod is broken and will take several hours to repair. Archer sends some data to Phlox to analyse, then T'Pol gets to work rerouting the bulkhead controls to engineering. However, when she gets an electric shock, she angrily throws the circuits at Archer and Malcolm and accuses them of trying to undermine their work. Malcolm suggests causing an overload in the power grid, which would override all systems including the bulkhead mechanisms. T'Pol vetoes the idea, since the warp core is unstable, so it will probably shut down the antimatter containment and cause a warp core breach. Then, believing that Archer is trying to kill the Vulcans as revenge, she points a phase-pistol set on "kill" to him. There's a bang at the door, causing everyone to turn around and Archer to disarm T'Pol and point his phase-pistol at her.

Meanwhile, Phlox and Trip examine the bio-scans and determine that the large amounts of trellium are what's causing the Vulcans' erratic behaviour. He contacts Archer and tells him that unfortunately the Seleya's crew can't be saved, but that T'Pol can. Then, the communication is cut off and poisonous gas starts to flood the room. Malcolm activates the overload and they escape through an access tube. They find a hole in the floor that leads to space, but luckily are able to bridge the gap. Archer has to stun T'Pol and Vulcans attack Malcolm and Hawkins, but they manage to cross it.

They reach Shuttlepod 1 to find the docking clamps locked, but thankfully Shuttlepod 2 comes to the rescue. The shuttles then dash away as the Seleya blows up. Archer orders Trip to put the trellium he and Travis found in a bio-hazard locker, while T'Pol recovers in sickbay.

Days later, the crew has movie night, followed by a tactical alert. T'Pol strides down the corridor and is attacked by a Seleya crewmember... only, she was just having a nightmare.