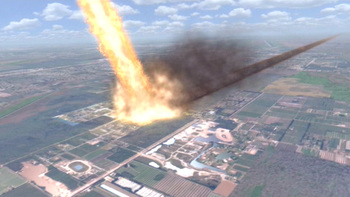 Enterprise was never the same after this one.
From the vast void of space, a spherical probe emerges from some sort of portal and approaches Earth. It slows, glows with power, and suddenly fires an energy beam that burns a swath from Florida through the Caribbean. It suddenly implodes as soon as it finishes its attack.

Meanwhile on Qo'noS, the Klingon Chancellor and the High Council are understandably pissed (well, more pissed than usually). Twice, they've had Jonathan Archer as their captive, and twice, he's escaped. They address Duras, son of Toral, and assign him the task of finally executing him. Meanwhile, on the NX-01, the senior staff is called to the conference room. Seems Archer has been talking to Admiral Forrest three times in the last hour; something is obviously up. He finally arrives and says what happened: an alien probe has attacked Earth and a million people are dead. Enterprise has also been recalled home. He gets another call from Starfleet Command, and simply orders them to reverse course.

In the captain's ready room, Trip tries to learn from Archer what part of Florida was hit. Seems his sister still lives there, who he always protected. Solemnly, Archer says the death toll has been raised to three million, and after, T'Pol informs them that a Vulcan ship located the remains of the pod and its dead pilot. Naturally, everyone wants to know who did this and why. As if on cue, the Suliban arrive and abduct Archer. Silik brings Archer to meet Future Guy, their patron who's been manipulating Enterprise's mission and Big Bad of the series (don't worry; this is the last we ever see of Future Guy). Turns out Earth was attacked by the Xindi, a race who, like the Suliban, are pawns of another faction of the Temporal Cold War. They've been told that humans will destroy their homeworld in four hundred years, so they're going to prevent that by destroying Earth. As usual, T'Pol is highly skeptical about this "faction from the future," but Archer has little option but to believe him.

They finally arrive at Earth, and the official death toll is now seven million. As they near Sol, they are attacked by a Klingon Bird-of-Prey commanded by Duras, who quickly disables Enterprise and prepares to board her. However, he gets ambushed by Earth's home fleet and is driven off. In San Francisco, Archer tries to convince Admiral Forrest and Ambassador Soval to have him find the Xindi. While Forrest seems on board with this plan, as losing a single ship is a small price to pay if they're wrong, Soval is extremely hesitant. It seems the Xindi live in the "Delphic Expanse," a region of space home to aggressive species and unexplainable anomalies. Few ships which enter it ever return, making it a space Bermuda Triangle. Despite this, Archer plays his trump card from Future Guy: a component of the probe is actually from the future. While Forrest is able to convince Command to reassign Enterprise, Soval tries to have Archer psychologically analyzed (which naturally fails). Meanwhile, Trip and Malcolm visit Florida, seeing the vast devastation which includes his sister's house. Having not heard from her since, they naturally assume the worst.

Archer and Forrest fly to spacedock to see the NX-02, still under construction. They go over the exposition: Enterprise is getting refitted with new weapons and Archer has called on the military to send a detachment of Space Marines aboard. Despite not having a single clue about where in the Expanse to search, or even any idea when the Xindi are going to finish their weapon, Archer is confident that they wouldn't have been warned if they didn't have a chance to stop them. Meanwhile, Phlox is more than willing to stay aboard, while T'Pol is clearly conflicted about what she should do: she wants to stay, but the High Command has ordered her back to Vulcan. Down in the armory, Malcolm is overjoyed to be installing new photonic torpedoes, far more powerful than their spatial torpedoes. However, his attempts to console Trip about the death of his sister fail, with Trip merely wanting to get back at the Xindi.

In Forrest's office, Soval shows a recording from a Vulcan ship that had entered the Expanse. After being there for only two days, the entire crew became violent and killed each other. Despite this attempt to frighten Archer into not going, the humans resolve to continue. Soval attempts to recall T'Pol to Vulcan, but she believes she's needed more on Enterprise. So, with new weapons and new equipment, Enterprise departs for its new mission. While Archer and Trip have some scotch and discuss their plan, Duras attempts to ambush them again, but Malcolm's new torpedoes quickly disable him. Afterwards, T'Pol tells Archer that she's remaining on board and will resign from the High Command. With that, Enterprise makes a beeline for the Expanse.

At the vast cloud layers surrounding the expanse. Duras ambushes them again, this time with two more ships. As they approach the Expanse, his help break off and Enterprise pulls off an L-4 which allows them to hit Duras' unshielded stern, blowing him to hell and beginning his family tradition of dishonor. Archer orders a straight and steady course, taking them right into the Delphic Expanse...