Fan Fic / Ghosts in the Machine 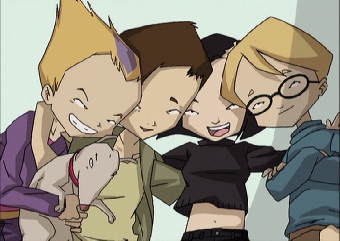 Ghosts In The Machine is an Alternate Universe / After the End / Limelight Fic for Code Lyoko by Carth. It was released on Fanfiction.net on February 14, 2011. It can be found here:

The story is taking its sweet time to unfold, but here it is thus far: After a largely unknown and nigh unstoppable cataclysm leaves France and some areas of the surrounding countries completely uninhabitable, the few survivors are evacuated to overcrowded and chaotic refugee shelters on the surrounding islands. The story centers on Sissi and Jean-Pierre Delmas, who have settled at Avenshire Academy, an Irish private school turned privately-run refugee shelter. Jean-Pierre is trying his hardest to find stability in this new world, but Sissi can't find settled ground, or figure out whether to reject her memories and attachments to the world she has just left. But soon, as she begins to discover the truth behind the attacks on her school, as well as the fates of four of her classmates, her quest takes her in a new direction...

19 chapters have been written in total. The fic is split into three acts - Act I has 14 chapters, Act II has 5, and Act III will have 11 chapters plus an epilogue, for a total of 32 chapters.

Working titles for the fic included "Teddygozilla", "The Day Everything Went Wrong", and "2/14/11." It is rated T.

Has nothing to do with Ghost in the Machine.

Note: There are spoilers ahead, especially for Chapter 13.

Ghosts In The Machine provides examples of: