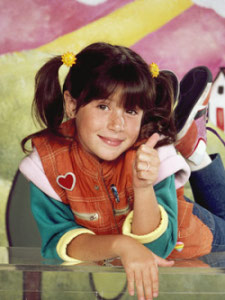 Used as a visual clue that the character is young or immature. This view may have come from the Chinese custom of unmarried women wearing their hair in two buns on either side of the head (which if combined with the twin tails yields a well-known icon). Or from the modern European custom that a grown woman wore her hair up. This can also be associated with nerd girls.

Can be combined with Regal Ringlets, in which case they're indicative of both high social status and youth, perhaps suggesting the wearer is a spoiled child or interested in the lolita fashion scene. Another popular variation is replacement or pairing with loads and loads of hair decs.

Compare Tomboyish Ponytail. Not to Be Confused with a literal meaning of "twin tails" where a creature or character (or aircraft

) has two or more tails.