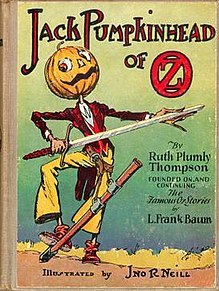 Jack Pumpkinhead of Oz is the twenty-third volume in the Land of Oz book series, and the ninth written by Ruth Plumly Thompson, published in 1929.

Peter Brown, a repeat visitor to Oz by this point, mopes in his attic, unable to play baseball due to the rain. In the attic he finds the sacks that were full of gold when he brought them back from his first Oz adventure two years earlier (in The Gnome King of Oz); and one of those sacks contains an odd gold coin. Toying with the coin and thinking of Oz, Peter wishes himself back there — and suddenly finds himself in Jack Pumpkinhead's front yard.

The sensible thing for Peter to do is to head for the Emerald City; and Jack is ready to act as his guide. Guiding is not Jack's strong suit; the two quickly get lost in the Quadling Country, where they blunder into Chimneyville and Scare City. By chance, Peter finds that his empty sack will consume objects and creatures that are scooped into its open mouth. Jack and Peter also happen to obtain the magic dinner bell of Jinnicky the Red Jinn, which supplies Peter with needed provisions.

The two travelers adopt a third member for their party when they meet the doggerel-spouting Snif the Iffin (he's a griffin who has lost his "gr-"). The three then encounter the unfortunate Belfaygor, the Baron of Bourne. He has been accidentally cursed with a rapidly-growing beard that he must constantly snip away. Even worse, his fiancee, the princess Shirley Sunshine, has been kidnapped by the local villain, Mogodore the Mighty, the Baron of Baffleburg. To impress her and gain her fancy, Mogodore decides he will conquer the Emerald City and make himself king.