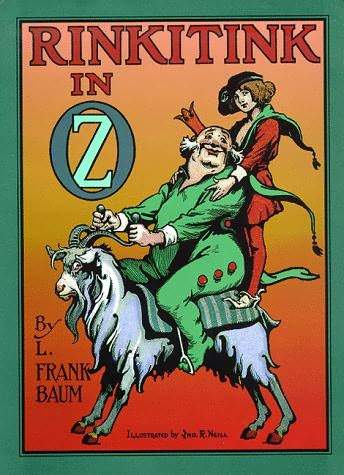 Well, he goes to Oz briefly.

Rinkitink in Oz is the tenth book in L. Frank Baum's Land of Oz series, published in 1916.

The book begins as King Kitticut, who rules the island of Pingaree in the Nonestic Ocean beyond the continent which Oz is the center of, tells his son Prince Inga about the secret defenses of their country. Pingaree was once invaded by the armies of Regos and Coregos, two neighboring islands to the north. The invaders were defeated through the use of three Magic Pearls, gifts of the mermaids. The Blue Pearl gives superhuman strength; the Pink Pearl protects the bearer from all harm; and the White Pearl provides words of guidance that only the bearer can hear. Using these pearls, Kitticut's father and predecessor had led his people in an effective resistance against the invasion; the forces of Regos and Coregos were driven out, and drowned on their journey home. Inga has become old enough to learn these secrets, and Kitticut tells his son of the pearls' secret hiding place.

The next day, Pingaree receives a royal visit from Rinkitink, king of the country of the same name, a plump and jovial neighboring ruler. Rinkitink is accompanied by his surly talking goat Bilbil. A surprise attack from Regos and Coregos lands suddenly, and seizes King Kitticut before he can make use of the magic pearls. The island is devastated and the inhabitants consigned to slavery. Inga evades the enemy by remaining hidden high in a tree, while Rinkitink accidentally falls down a well. Once the island is deserted, Inga rescues the king, finds the goat (who had been ignored by the invaders), and retrieves the pearls. Thus the three of them set out to free the citizens of Pingaree.

The novel derives from a 1905 manuscript which Baum originally wrote as a stand-alone fantasy book, but which was unpublished for unknown reasons. Having been quite busy with his film company and his health issues at the time, he simply tacked on an Oz-related ending and submitted it to the publisher as his yearly, contractually-obliged Oz book. Since that original manuscript no longer exists, it is up for debate whether it had a different ending before it was made into an Oz book or if it had simply been unfinished beforehand. The resulting Deus ex Machina ending due to Dorothy and Ozma's sudden involvement in the plot is surprisingly unpopular with Oz fans, to the point where a legally published Fix Fic, King Rinkitink, was authored by Andrew J. Heller and released in 2017 with the backing of the International Wizard of Oz Club, in an attempt to bring the story back to what the original manuscript may have been like, sans any Oz elements.