Film / The Mill And The Cross 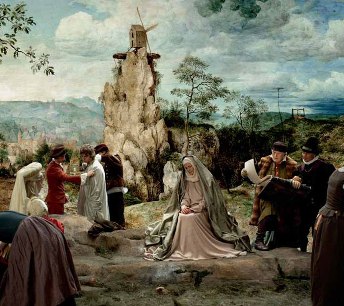 The Mill and the Cross is a 2011 film by Polish filmmaker Lech Majewski. It is based on Pieter Bruegel the Elder's painting "The Way to Calvary

◊" and depicts scenes from the lives of the Loads and Loads of Characters in it.

We see a young man arrested and executed by red shirted mercenaries (presumably because he is a protestant), travelling rogues and musicians, and a miller who watches everything from his heaven-like vantage point on top of a massive crag. We also see the crucifixion, and hear reflections from the Virgin Mary.

In between, we hear conversations between Bruegel (played by Rutger Hauer) and his patron (Michael York), discussing the composition and meanings of the picture.