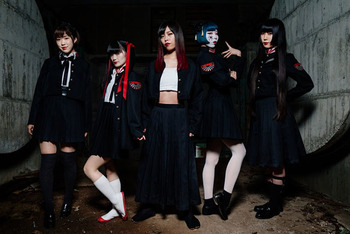 Idols you can meet... in Hell!
Advertisement:

Necronomidol, the ultra-dark idol unit, was founded in mid-2014 as an example of an alt-idol group that is Darker and Edgier even among other alternative idols, as opposed to the usual Idol Singer tropes. Their initial output consisted in a blend of traditional Japanese folk music and aesthetic with Black Metal; later on, they began to incorporate other metal genres and other styles such as Dark Wave and Synthwave, for a catchier sound that still mantains the general somber attitude. Their imagery is influenced by, other than the aforementioned Black Metal's visuals, the occult, Japanese and Western horror tropes and (as their name implies) the Cthulhu Mythos.

Interestingly enough, they were self-produced and the unit's founder and producer Ricky Wilson (not the singer from Kaiser Chiefs) is an American living in Japan, who, as a fan of both idols and horror, wanted to create an idol unit themed around the paranormal: by all accounts, he succeeded. Unusually for a Japanese idol group, they also toured several times in Europe and the US, building a nice following for what is a very niche product.

In late 2018 the management announced that Sari and Hina Yotsuyu will leave the group to pursue other activities, effective from January 2019. Kunogi Kenbishi and Michelle took their place since then. However, Kunogi had to leave the unit in September 2019 (read the Trivia tab for the reason why). They were also scheduled to perform at the 2020 Monster of Dolls

Japanese idol music festival in Italy but canceled their participation for unknown behind-the-scenes reason, with the manager citing something about the contract they signed. (Sari was a special guest at the 2019 edition, after leaving the unit).

In early 2020 it was announced on Twitter that every member (Risaki, Rei and Michelle) except Himari would leave the group. No reasons were given for the members' departure; it was said that it was caused by an "incident" behind the scenes, but the reason will probably never be known. The management said that they were in the process of recruiting new members, and the official Twitter

revealed them, as well as a date of June 2020 for the unit's "rebirth". They are Nana Kamino, Shiki Rukawa and Toda Roa. In the meantime, Risaki, Rei (now known as Ray), together with their old friend Hina and a fourth girl became part of a new unit named MANACLE

, with a vaguely similar aesthetic.

However, history repeated itself in 2021: the unit entered a hiatus since April because of Nana's health issues, Shiki's sudden graduation and Toda's commitment to her parallel solo singer-songwriter career. The management had plans to introduce a fifth member to the group, but at this point the future of Necronomidol is up in the air.

and their Bandcamp page

. Compare and contrast with Babymetal.