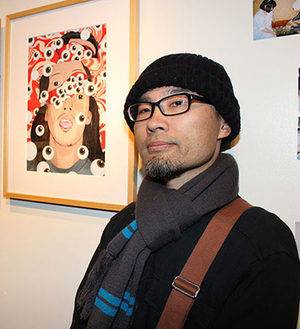 "Basically, it’s a question of how many variations of stories I can come up with that revolve around shit and sex."
—Shintaro Kago, Vice Magazine

Shintaro Kago (born 1969) is a Japanese absurdist manga artist. While his works fall under the Guro genre, they are far less sexualized than that of his contemporaries, instead focusing on screwing with the heads of the readership. They also full of nonsensical humour, toilet jokes and general Black Comedy. With emphasis on nonsensical and black.

It should go without saying that just about everything he's done is Not Safe for Work. Or stomachs.

He has also published

Tropes common to his work include: