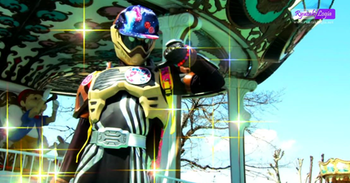 Thanks to the public announcement by the Ministry of Health, the number of Kamen Rider Chronicle players seems to have decreased significantly, which would subsequently reduce the amount of game disease patients. However, unbelievable information about Kamen Rider Chronicle is released by Ren Amagasaki, the new CEO of Genm Corp. There is a hidden component inside Kamen Rider Chronicle, one that is said to dramatically increase player participation! However, Taiga, who was suspicious of the love and go CEO's actions, goes into Genm Corp. to confront him himself...